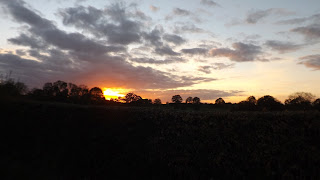 Jetlag kicked in with sheets of exhaustion sapping his energy. The plane still thrummed in his ears. From the long coach ride to Bristol he first impressions of England were miniature green fields, like a printed circuit board.
He was so glad to arrive though the coach station was unremarkable. He expected red buses and black cabs. Despite his tiredness he preferred to walk, rather than catch a cab. He followed the signs to the university, glad to soak up the atmosphere of the stone buildings rimmed with a dirty bloom.
His lodgings must be around here somewhere – the buildings were ancient with old windows and shrubby gardens and crumbling stonework.  The knocker was a curved hand which pounded on the door. There was no answer even though the sound echoed deep within the house. He peered through the letterbox – a small landscape of cold hallway greeted him, lit by a soft light. A row of shoes. Goddamn it, he’d have to find somewhere else.  They knew he was coming didn’t they? He made himself calm down. Tomorrow he’s meet Prof Nick and the  other PhD researchers, and explore this place properly.
He found a motel but the charges were hellish steep, so he wandered on, then spotted something. Well, why not? He liked camping, and after all he was broke. He lifted the large lid of the industrial sized bin, delighted to see it contained paper and cardboard. Sleep and dreams of flying claimed him quickly.
The bin men’s early breath and exhaust fumes hang heavy in the air. Piper was having a good morning – he worked fast, efficiently, and today the smell of the restaurant bins was subdued with the frost. He had a good system – you had to pull the bins out and position them behind the yellow jaws of the refuse lorry to be picked up, then run ahead to fetch the next bins. That way they lorry could move quickly along the road with minimum disruption to the traffic.   When the round was finished Piper and the gang headed off to the Avonmouth Depot where the lorry disgorged it’s compacted load.