Nakedness comes without warning: a rabbit crouches, held to the gritty tarmac as light-beams bear through the night. I’m trapped, not daring to breathe.I open the window, leave the front door banging, catch clear views of the valley, let the wind sweep through. The hens scratch for grain. Over a cup of coffee I read the paper. There is no news I can make sense of. I had a bad night, heavy with sleep I turned with the wind, waking with a start from a dream of betrayal.

On the wall hangs my magic carpet from Istanbul. The pink centre catches my eye, love and wealth woven by Turkish women in the mountains. Authentic, said Mahmood. I head for the fields, though  farmers around here wouldn’t recognise these scraps of land as fields. They were unsure about me, couldn’t see me sticking it, a woman on her own, out here.

Mr Scott was the first to inspect. A jockey of a man with bandy legs coming up the valley, bobbing from side to side. Dressed in a sports jacket and over large wellies, blue plastic bailer twine dangling from his pocket. He stood about 100 yards from me leaning on one leg swishing a hazel stick at some couch grass. He pushed his  cap back to reveal yellowing grey hair and started fiddling with his pipe. Tap tap on his hands, emptying the old ash out,then bringing out a tin of baccy. He studied me as he might a spring tup.

He walked over. The handshake was firm. He resumed his meditative pose, leaning on his stick, puffing on his pipe, presumably for inspiration. His pipe moved in time with his words which were short to prevent the pipe losing its grips on his thin lips. Underneath the wild eyebrows the eyes were studying my cottage and fields behind me. When he glanced at me I could see that the colour of his eyes was mackerel.

“Difficult land this. Not much money in it.”

He took out his pipe very slowly and spat. “This is sheep country. There’s no market for herbs. Sheep, you won’t beat sheep.”

He laughed. “I could rent a field from you if you like, pay on the nail, give you a helping hand. Can’t say fairer than that.”

“Mr Scott, I’m a trained horticulturalist, I know what I’m doing. Now would you like a cup of coffee?”

“Never drink the stuff. Good day to you Mrs Blore.”

He didn’t respond of course. That had been two years ago and the harassment that followed made me more determined to succeed. The old chap refused to mend his fences and when the sheep broke through and began eating my comfrey or cotton lavender he’d arrive an hour after my polite phone call then comment on the inefficiency of the barricades I shoved in the gaps of his fences.

Mr Scott had  duplicated his humour in the shape of a brawny, black mopped son. He liked to park his tractor close to my lavender fields. Blaring Radio One, engine running, he would amuse himself watching as I hand-hoed my crop. He liked to shout, “how’s the herbs missus ? Before tearing away in a belch of exhaust fumes, cackling with laughter.

It got to me, I was the outsider, and I’d never fit in because I wasn’t born here, wasn’t a country person. Wasn’t one of them. I tried the The Horse and Jockey – the car park was full of land rovers, 4 x 4’s. A belt of laughter and a yellow glow shone through the small leaded lights but when I pushed open the heavy door the men resting their pints on the bar stopped their conversations, began a series of nudges and winks, hunched their backs and a curious hush descended as I waited my long turn to be served.

Another bad night. A rancid dream wakes me slick with sweat. Being trapped. A blackness over my star. One has to be practical, and as dawn bleaches the white walls of my bedroom I head for my ‘scrap of land.’ It’s seven in the morning. I trail my hands over the lavender, letting the scent support my longing. The flower heads are moist and crisp; it’s a good time to harvest at this hour. The trug quickly fills. I mix the lavender with pine cones and bark shavings, keep it pepped up. My grandmother used to pack her lavender into fine lace pouches, but she would have approved, I think.

In the city I was scared of walking alone at night even a few yards to my car. The unnatural light made shaded corners more frightening. I saw myself as rapists or muggers might, rushing past lonely spaces without looking right or left, unable to hear anything but my own thumping heart. A target. Here darkness is honest. Stars can shine brightly, the moon control the heavens. Nocturnal life can flourish. Bats, owls and running things scent the night, part the air with beating wings, watch and listen for each other from tree, burrow or tussock of grass.

The dreams are getting darker. When I switch off the bedside lamp the night completes itself, outside and within, a closed circle. The cottage fills with an inky space full of creekings and rustlings that belong to old buildings. Outside the moon hangs heavy, pregnantly silver. I force myself out of bed to look though the window, to make out damson and hawthorn, steady in the deep. As I stood with my back to the bed I heard a scratch on the stair, someone watching me. I turned around quickly to confront it but white space above the bed mocked me. A white wall absorbed my looking, gave nothing away.


I wonder if my mind is playing tricks. The dream is of grinning, staring faces. My head is rigid, I’m forced to look, locked in, sweat-naked. They are coming closer. I crouch in the road waiting for the head lights. At the last moment, screech of tyres, animal squeal releases me to run for freedom. And I am safe until the next time. In the mornings I tend my flowers, and bushes will dig, water and weed, soil my fingers with earth in a constant prayer, hands engraved with dirt.

Today I abandon my trug, set off down the valley; for once the work can’t hold me. The hedges have come on since the rain – the first blush and bloom of summer. The cow parsley erect with delicate creamy heads, timothy grass upright and smooth to touch, feathery rye grass sways on long stems and at the base of these, coarse swards of couch, deep green and sharp. These simple pleasures renew me, were the reason I returned to the country after the falseness of concrete and streets beneath my feet. At least that’s the  reason I give to the people around here. I don’t want to think about it. If I’m going to think  like that I may as well return to the cottage, tackle the accounts, phone suppliers, fix delivery dates, deal with the real. I thought it was buried.

The air is so still, weighty, the clouds hang. I veer into the wood for cool comfort, sneak under the barb wire. I don’t know this part. White feathers, all that’s left of a foolish wood pigeon. The earth is crushed, airless. Trees guard the light from the bottom levels. It’s not managed. Brambles arch, whippy elder thrusts, my feet stir last year’s leaf mould releasing spores. Rustling loudly through the thicket my senses are full of my own crashing sounds. I need to get out. I thought I knew the way. Something ahead – a small body twisted, prone. Badger. Guts ballooning, opaque belly stretched, blue-ing. Dulled snout, flies. No reason for it to die.  Sudden tears for swollen belly poisoning whilst I chose a cot.

Bloody wood. I rage out of that wood past brambles and nettles till I reach the field.

Clouds move over the sun, Can’t cry. Catch my breath, rub my bramble scars, then hear a sky lark singing, a thin rope of sound pulling higher and higher up the air.

Squint to see a tiny fluttering in the sky. There. A moment’s song, then the plunge, down, down like a stone. 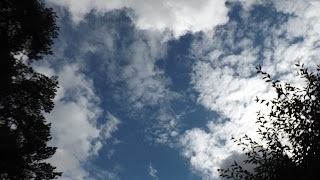 This story was a buried treasure – locked away in a folder forgotten about. Thank you to Fiona who reminded me I’d written it, after seeing my recent blogpost Buried Treasure, and for keeping a copy from the 1991 writing group. The story needed editing hard, which shows how my writing’s improved in the last 20 years.  Enjoy.