Sometimes I sit in front of the blank screen willing myself to write. But no magic story-telling genie arrives.  And what I do write feels lifeless and wooden and I can’t connect with the magic of it.

Even worse it’s my writing Saturday and not only have I not written, but also not cleaned the house, shopped, cooked, talked to my children, cooked tea. I can’t get in the flow – nothing emerges, or I strangle it at birth with a heap of criticism.

I’m now using a technique called microblogging. Setting aside 20 minutes of time to write every day, with a time to show up and work, write for a set time, then stop, with an idea for the following day. It’s been working – I’ve been thinking around some ideas for short stories. Nothing much came up but I used the photo below as starting point. On my 40 minute train commute to work I’ve been scribbling away desperate to finish this story. 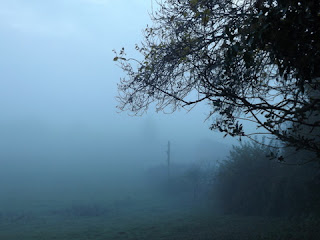 A misty morning last November in Staffordshire. I love the quality of the light, what’s in focus and what’s hidden.

Here is the  story that I wrote on Monday/Tuesday March 4th & 5th 2013. No inspiration involved. Parts of the plot was lifted from a newspaper article I’d read months ago, and the details of visual impairment came from an equality workshop I attended for work. The original bit, is the character, and the words. Let me know if you like it.

Being blind has its complications of course. Steps. He counted endlessly. A metronome in his head, a concentration of maths. Commuters on the way to the station platform  watched him nervously as he poked his toes over the top step of a flight of 12 concrete steps, holding onto the dog by a silver harness. He seemed poised for action on the top step then stiff- legged began his descent down.

He didn’t want any help though. He was in charge. He worried someone would grab him, pull his sleeve – it happened sometimes. He’d rather they stood back and let him move at his own pace. Fran and George were fine very much thank you. Fran didn’t like being petted when she was working, and it made him nervous in case she got distracted. Really it wasn’t fair for people to interfere.

He heard the ping- pong of the station announcer. George would love a job like that. Using his voice to help others. Sound was his most secure sense. He boarded the train. The door slammed, a whistle blew  and  he settled back, quickly disturbed by a rustling plastic bag, a hiss as a bottle was opened, a fruity call of a mobile alert. A low screech and the long pull out of the station. Then the noise changed to a whine on the tracks, a shivering rumble on the suspended rails as the carriage swayed from side to side, gathering speed. Warmth on his naked eyelids. The thing they called the sun.

A pressure in his ears told him there must be a tunnel. Eventually he heard  “Train now arriving in London. Please take care when leaving the platform.”
Fran didn’t like getting off. Too much of a jump. He used the long reins to help her and felt gingerly for the platform edge, positioning himself sideways to  ‘mind the gap’.

Paddington was always a concern. Noise was  amplified; he imagined a cave, voices like the sonar of bats rising. Odd echoes in the blackness of his head. A hiss of brakes as a train heaved to a standstill, slapping doors. People like naked mole rats.

Fran kept halting, people must be in her way. Strangers at Paddington seemed not to notice him as they did in his home town.

“George!” Mickey’s voice was near. He led George deep into the underground tunnels where the distant whoosh of stale electrified air and the vacuum of passing lives filled his senses.

“Well, fella, there you go,” Mickey said as he placed a bottle of water in his hands. “The washing up bowl’s in front of you,” he said.

“Thanks, said George,” the sound of his own voice like a thin, underused stranger. George placed his white stick in the bowl to keep it secure. He felt the coldness of the tiles behind him and leaned back against the wall.

Fran responded by a thump of her tail once, twice, three time, so he knew she was fine. He began his day’s work – whistling to the crowd and listening as the coins chinked up. From experience he knew that optimal positioning of the bowl had to be closer to his audience so they didn’t have to walk too closely to him. They liked their privacy he supposed, but so did he.

Between tunes he counted, assessing the difference between pound coins and 50 pence pieces. It wasn’t just a game.  Until Fran could tell the difference between someone putting something in and someone pulling something out he had to rely on the honesty of strangers. But he knew that there were more chink chinks that went in than came out at night. Since the recession people were less generous and more of his money went missing from the bowl, despite the white stick firmly planted in the centre of it. It wasn’t fair, this was his job. It was a good enough living for three days a week, but not if his takings were being interfered with.

That night he felt his way towards kettle, dog bowl and fridge, hearing the predictable babble of Radio Four and the purr of the heating. He longed to be without distractions, for noise to settle like a blanket, not a curse.