Today was Wig Wednesday, and I joined in the CLIC Sargent campaign,a great charity who support  kids and young people with cancer.

I wore the wig on the long commute to work via train, in the corporate environment (civil service) where I work, then home again on the train. 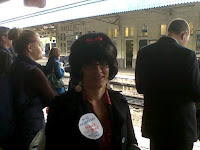 It felt nerve wracking to walk on the streets looking ‘strange and different’. Young children turned around and pointed, some strangers smiled, but commuters to London studiously ignored me, and I found myself feeling disappointed that I wasn’t being looked at. Still, I imagine they see far more exotic sights in the big bad smoke.

I became very self conscious about how I looked – a feeling I’ve not experienced that deeply since I was a teenager. Wearing a wig transforms and hides. A close family member lost her hair through cancer treatment as a young teenager, and seeing her lose her hair and becoming bald hit home what ‘cancer’ means and how ill she was. I thought of her bravery and courage through the long 3 1/2 years of treatment.

She wore a wig to school and one day a teacher told her off for having long hair, and to tie her ‘hair’ back in line with school regs. She couldn’t tie it back as the wig would fall off but was too embarrassed to tell the teacher and so burst into tears. For her the wig was a disguise not a choice at that time. And it was a CLIC Sargent nurse and social workers who supported her emotionally and practically during those years.

As I walked around I thought about all those you look ‘different’ because they are ill, disfigured, or just don’t conform to the norm. I wondered how they manage other peoples’ expectations, and stares. The best response seemed to be a smile, or a chin-up, straight backbone approach, to calmly accept that this is who you are and to out-stare the gawpers or smile at the curious.

At work I was greeted with laughter and a number of others borrowed the extra wigs I’d bought in. What intrigued me was how I was able to become more ‘me’ when wearing my costume. It helped that I dressed up to look as if I was a 1960’s glam girl. Colleagues became skittish, playful.

It made me think how powerful it is to dress differently, to defy stereotypes. In the wig I laughed more, was lighter, more authentically me, because I was showing a side of my character normally hidden at work. But if we hide ourselves from others – don’t we also hide ourselves from ourselves?

I plan to adopt dressing up more – I love it anyway – but doing this at work allowed me to become more ‘me’ and people today seemed delighted I’d dared to different, and wanted to know what I was up to.

As Oscar Wilde said, “Be yourself, everyone else is taken.” 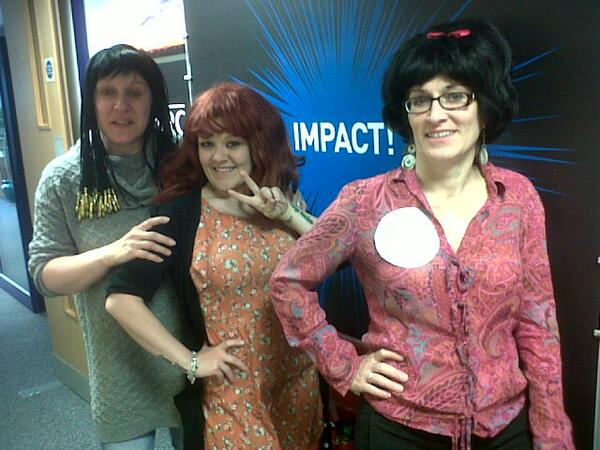