I’ve been writing since the age of 5. Poems at first – language was magical – I loved shaping it, trying to make it do what I wanted whilst writing quickly so not to miss any of the good stuff. I used to stay behind at lunch to write instead of going out to play. I was 11 when I won my first writing competition and got a cheque from the BBC for reading it on BBC Radio Stoke. I went to the same school as Carol Ann Duffy, though I didn’t know her, she was admired in the English Department even then.

My dream was to make a living from writing, so I studied journalism after school, but I was never hard-nosed enough and I wanted to write creatively. I found my natural home with an English and creative writing degree, became a performance poet in Sheffield, and was published in local mags  like Sheaf, and Here Now, alongside Ian Macmillan, Penelope Shuttle, Michael Horovitz. (Yes really!)

What happened? By the age of 30, despite encouragement from other writers, I was frustrated.  I hadn’t made it to being a ‘writer’ and became depressed. I stopped sending stuff out, stopped calling myself a writer. Writing was so AHH! important to me I couldn’t bear the rejection. 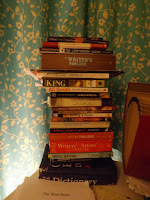 A lack of self-belief, fear of failure and a huge nagging internal critic meant I’ve at times struggled to get words on the page. Or I’ve written and not sent anything out for years. But I am serious about writing – this is my library of books about the subject.

I’ve been involved in many writing groups over the years and have some great writing friends who sustain me. For the last three years I’ve been writing a novel, The Wish Bone, and I’m now on my second draft. I want to finish it and get it published. I’m in an editing stage which doesn’t feel much fun, so I need to connect again with my characters, and the work.

I know many talented writers in these groups, who like me don’t send their work out. They think it’s not ready, it’s not good enough, or it’s not finished, or they’re not confident enough,  and all that sparkle and creativity on the page is lost. Their stories stay in the locked drawer.

Of course there has to be quality, as writers we want to polish our work to a high shine, but if we are too perfectionist or too defeatist our work is buried.

This blog is about breaking through those barriers, kicking away the blocks that bind, re-discovering old work, and getting to the magic writing flow. I want to find ways to be a writer that cuts through the stuff that keeps work languishing and hidden, and to help writers stuck in negative patterns find more positive ways to work.

I’m setting myself a challenge alongside 200 others with “Screw Work Let’s Play” . During the month of March I aim to re-visit old work to see if there’s any treasure within it, seek out writing opportunities, inspire others, write new work and send it out, to become a writer whose work is seen, whose voice is heard.

This blog is the start.